The reception pavilion of Quebec’s National Assembly was due for a modernization and re-imagining in order to create a fantastic, bold centrepiece that engages visitors’ senses and serves as a learning space.

Designed by leading architects Provencher Roy and Gagnon Letellier Cyr Richard Mathieu & Associés Architectes (GLCRM Architectes), the reception building was built underground, separate from the Parliament Buildings in an effort to define the modern reception space while maintaining visibility to the unique exterior façade of the heritage site.  Connected seamlessly to the front door via elevator, visitors are shuttled to the marvelous underground space in which they can fully experience the gravity of the legislature tower through one of the pavilions defining features: The Oculus.

THE OCULUS - The Defining Feature

The Oculus serves as a visual centre piece, complementing historic, iconic landmarks with the modern architecture of the reception pavilion.  The Oculus is in an exercise in precision, from its perfect sight-lines, to its fabrication, everything surrounding its existence denotes exactness.

The Oculus has an outside diameter of 5.6 m – 221” and is supported by two complex 5-layer laminates that hold 2900 Kg – 6400 Lbs of precision CNC radius insulated glass.

The resulting installation can be described as a work of art.  Polished, clear and impeccably fabricated, the Oculus is the centrepiece to this wonderous underground experience, casting brilliant natural light across its floor and creating an area of intrigue. 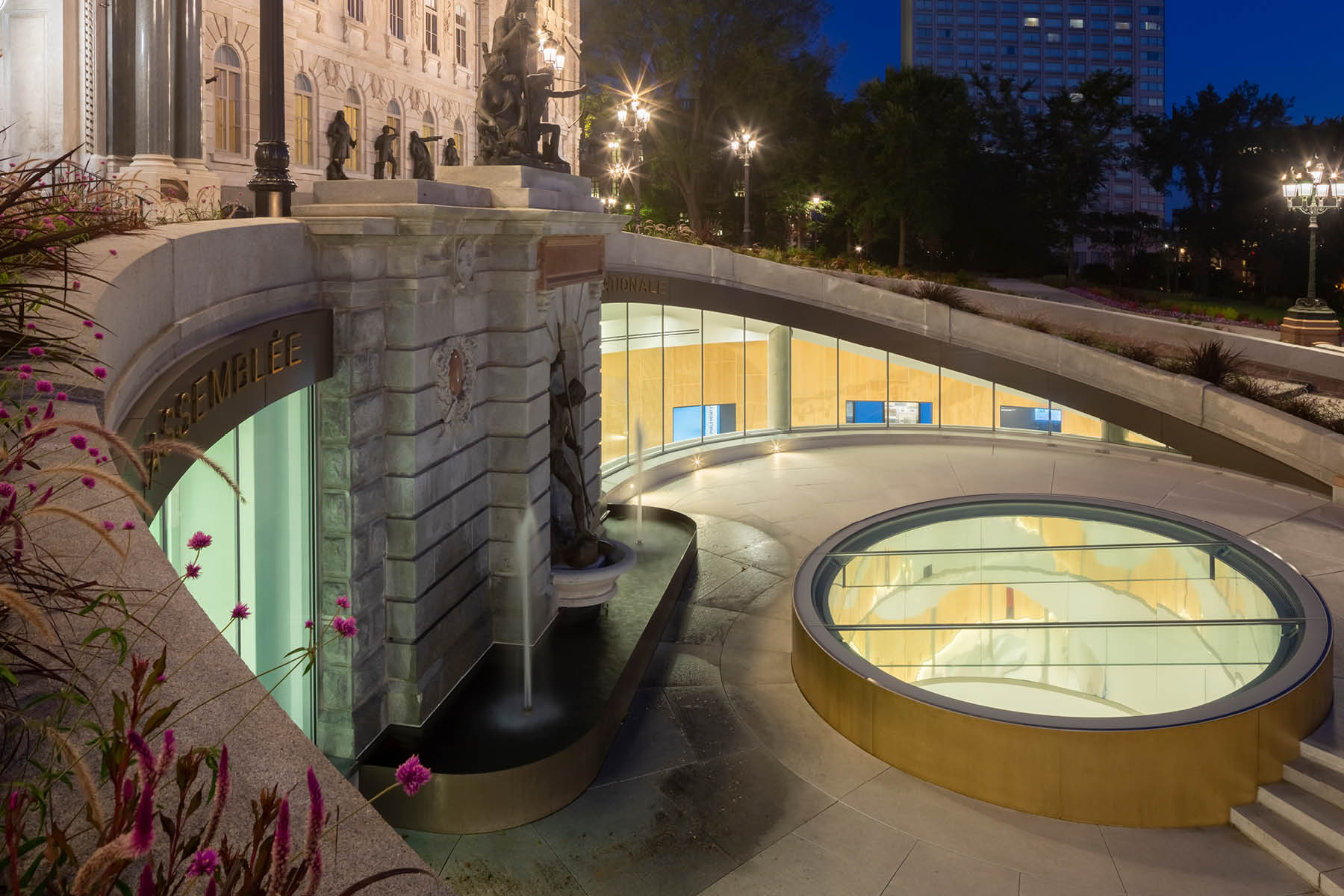 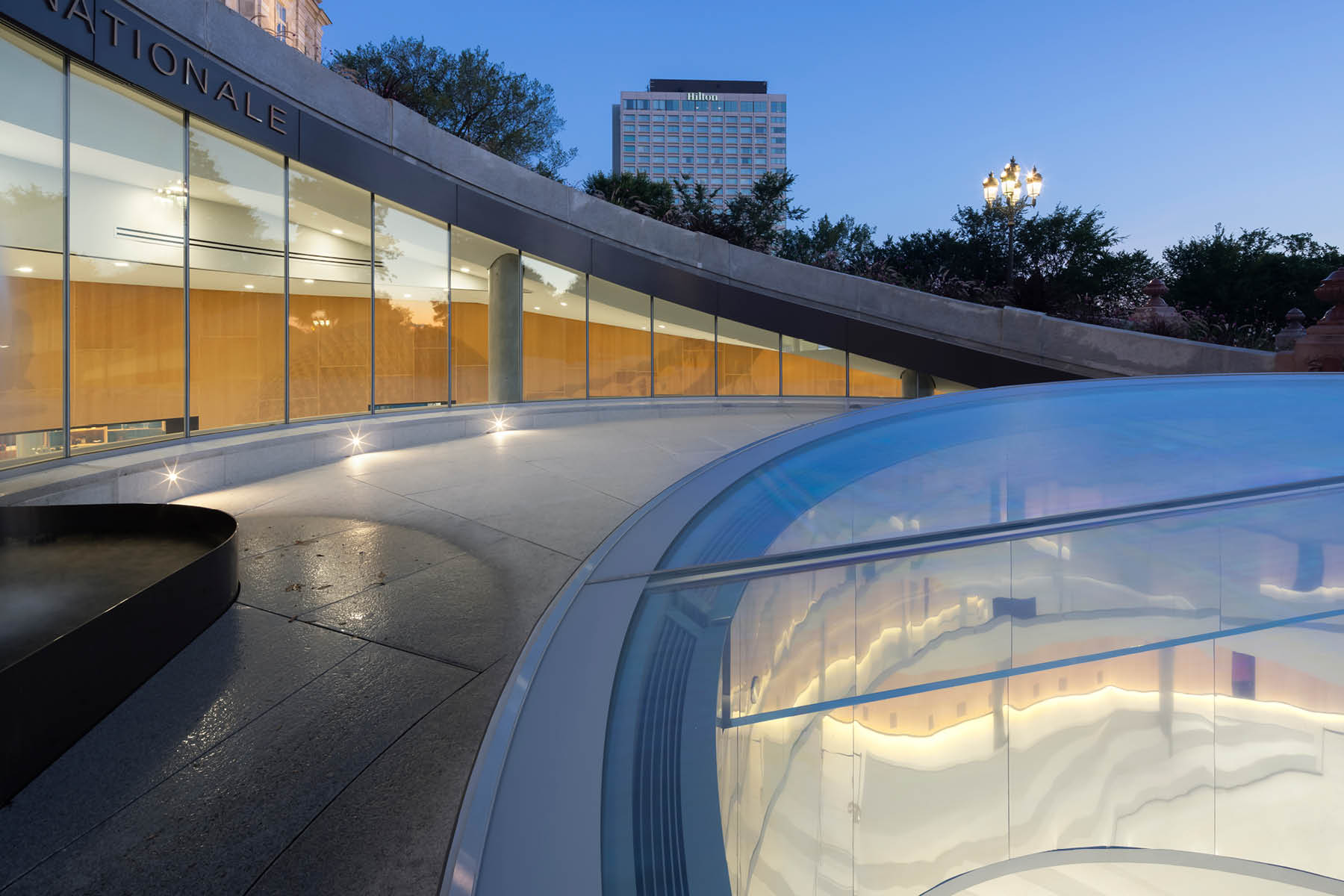 The Oculus was a highly complex project to fabricate.  James Cole, Project Manager at AGNORA states, “This was one of the most technically difficult jobs I’ve put through fabrication.  Our team really knows their stuff, and everything was installed without rejection or difficulty, the first time.”

The two horizontal supports had a myriad of custom features and incredible fabrication aspects including:

The three (3) exterior insulated glass units included a total of three radiused pieces with the outboard lite comprised of 3-layers of heat tempered Optiwhite SentryGlas® laminate.  To control the sun energy and provide insulation in Quebec’s cold climate, a triple silver coating was chosen by the architect for its high light transmission and neutrality.  The inboard lite comprised of Saint-Gobain’s Cool-lite® Xtreme 70/33 on 6mm Diamant and 1-layer of 6mm Optiwhite.  Boasting an impressive total diameter of roughly 5m, each of these pieces weighed in at roughly 2150 lbs.

When placed along the supports, the 5-degree supports allow for the glass to shed rainwater and maintain a relatively clear surface. In addition, the façade was constructed at exaggerated angle of 15-degrees to dissuade protestors from standing upon the glass and maintain safety.  “It was a circumstance that we hadn’t envisioned.  But the architect built-in this relatively steep angle knowing that parliament buildings are an area of frequent protests,” says Louis Moreau, Head of Technology & Innovation at AGNORA.

As the perimeter of the Oculus was placed withing structural supports, the full perimeter required custom printed frit to hide unwanted visual features.  AGNORA’s print team and world-class DipTech printer mixed a proprietary custom shade of grey to match perfectly to the surrounding features and caulking silicone.  This custom frit provided a transition, due to the colour choice, from clear to fully opaque glass without outlandish colour differences that would draw the eye and take away from the clarity of the Oculus feature.

BIG Glass isn’t just big, it’s also complex.  AGNORA prides itself on the custom work that comes with the territory of big Glass, delivering truly custom solutions with quality glaziers such as Vitierie Fortin.  The Oculus project, installed at Quebec’s National Assembly is the type of project we love. 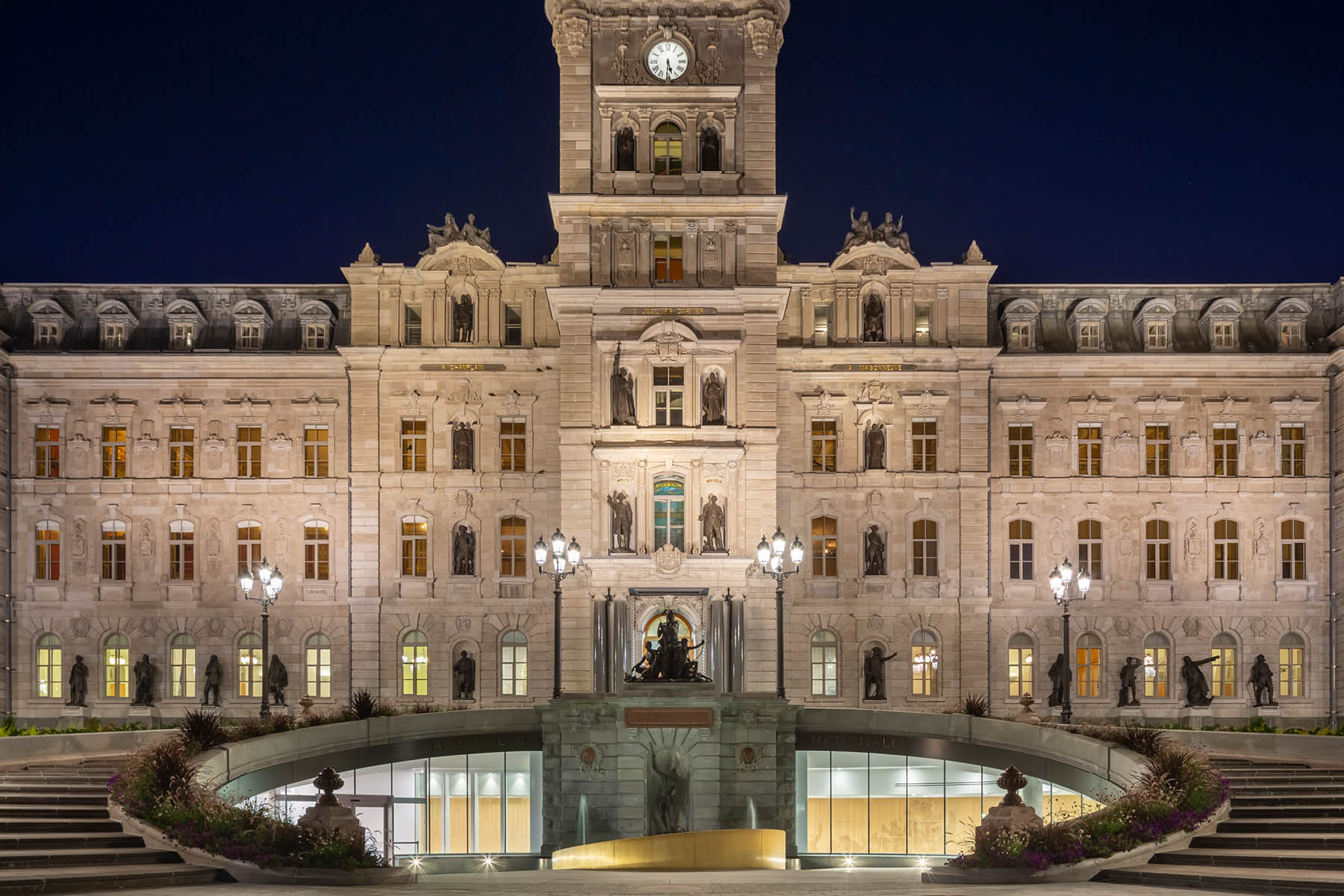